It’s great to work in a vertical that has a big audience with a lot of enthusiasm for the topic, like the travel vertical. However, it also means the vertical is competitive, and it’s easy to drown in the massive amounts of content published about the world of wanderlust.

But there’s a way to stand out in the travel industry, and you’ll discover how we did it in this in-depth content marketing case study.

Our work with John Wu, CEO of Travelmath, helped build both the awareness and authority of the brand through high-quality links and coverage. Here are examples of some of the top coverage over a 10-month period of our engagement, where we launched an average of one campaign per month:

We created and promoted content that dominated in a heavily saturated vertical by using three key content characteristics.

Getting Tangential to Reach New Audiences

Zooming out and being more broadly appealing with content can help you reach bigger audiences and high authority publications. At Fractl, we refer to this kind of content as tangential content. Knowing the benefits of tangential content, John trusted our expert team to decide which campaigns to make and promote.

With the client’s trust, we started brainstorming ideas that were somewhat related to travel but also had a very broad appeal, to target general, high-authority news publishers.

One of our earliest campaigns was called Fictional Travel Times, and it compared the relative speeds of fictional characters and vehicles, like Iron Man and the U.S.S. Enterprise. Its goal was to appeal to pop culture fans while tying in the theme of travel.

We secured coverage for the campaign on popular sites including:

BuzzFeed even created an awesome quiz out of it.

And while these placements were high-quality wins, if we’re being honest, it wasn’t even close to being our most successful campaign for this client. It was great to be tangential and have pop culture appeal, but when we started incorporating additional criteria for promotional viability, the links rolled in at a very impressive rate.

When you have the chance to position your brand as an authority in a way that’s also engaging for a wide audience, always seize the opportunity.

We had that opportunity – and we took it.

The campaign, called Airport Rankings, presented a ranked list of airports across the country based on a series of criteria gathered by the Fractl team.

Our creative team did original research for the Fictional Travel Times campaign, as well, but we took it a step further for this campaign by creating our own ranking system. The airport data was already there but hadn’t been analyzed and compiled in the way our team approached it, which made the client an expert resource for travelers across the U.S.

We presented the information in an interactive chart, which allowed users to view different ranked lists based on the criteria we considered, from flight delay percentage to TSA claims. Presenting data in a distilled, easy-to-understand way and having a clear, thorough methodology on the landing page allowed our project to stand out as an authoritative piece of content highly informative and valuable to people who fly and people who travel.

The results were immediate. Yahoo! News, The Huffington Post, MSN, Thrillist, and Gothamist covered the campaign, and the syndication was incredible.

When counting dofollow, cocitation, and nofollow links, the campaign was picked up 230 times.

But there were a few other campaigns that had even more success, and it’s because they featured one of the most shareable characteristics a piece of content can have.

Sometimes, the perfect idea comes along (after days of optimized brainstorming and a thorough knowledge of your client and client’s vertical). This perfect idea meets the previously discussed promotional components, in addition to one more: the element of surprise.

We ended up doing a series of what we internally called “hygiene campaigns” for Travelmath, in which we assessed how many germs were present in different locations.

The first campaign we created was called Airline Hygiene Exposed, and right when we launched it in promotions, we knew we’d tapped into something amazing. The campaign was covered by top news publications like CBS News, The Washington Post, CNN, and more, with more than 14,000 social shares generated from the CNN placement alone.

But this wasn’t a surprise to us.

When we pitched this idea to Travelmath, we were confident in its success because it not only met the surprise factor, but the other two factors discussed in this case study, and these three factors make up the promotional trifecta: 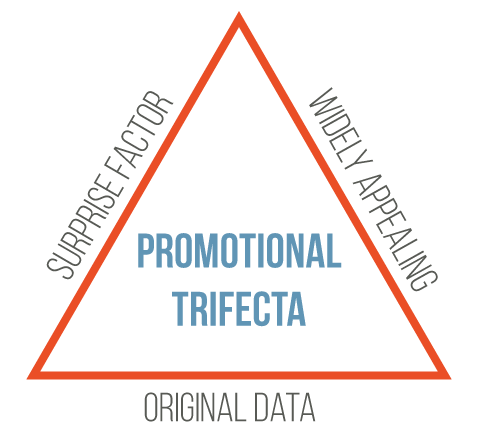 Here’s how this campaign met the Promotional Trifecta:

The hygiene campaigns we created serve as a comprehensive example of how, when these three criteria come together, incredible things can happen in outreach.

Our team uses the trifecta, along with other criteria we’ve researched, to generate ideas with high potential for coverage on some of the web’s best publishers.

There are exceptions to the trifecta rule, which we assess on a campaign-to-campaign basis, but it’s a great foundation and serves as one of the cornerstones of our creative endeavors. It’s a concept we consider not just when coming up with ideas, but also throughout the creative process and even into promotions.

Our digital PR team knows exactly how to craft personalized pitch emails that highlight the most promotional aspects of each campaign so that the content appeals to both the potential writers and their audiences.