Superdrug Online Doctor came to Fractl, a leading content marketing agency, with the primary goal of improving their off-page SEO. As this case study will reveal, our partnership accomplished just that.

After 16 months of the engagement and 26 campaigns, Fractl was able to secure:

So what bottom-line impact did this have on our client Superdrug Online Doctor?

The incredible outcome is evident in the increase in organic search traffic, which illustrates an improvement in Google rankings as a result of our campaigns. 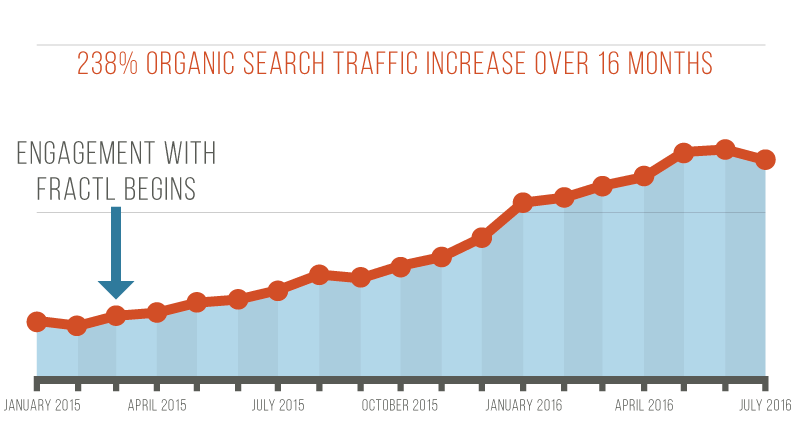 A couple of our campaigns performed so well that it was hard to even quantify how many millions of people saw the content.

Our project Perceptions of Perfection is a great example.

We asked graphic designers across the globe to Photoshop the same image of a woman and make her more attractive based on their country’s beauty preferences.

The BuzzFeed coverage of the story alone performed amazingly, with more than 3.5 million views.

Check out the steady, ongoing lift in overall sessions on the client’s website due to the spike caused by a super viral campaign: 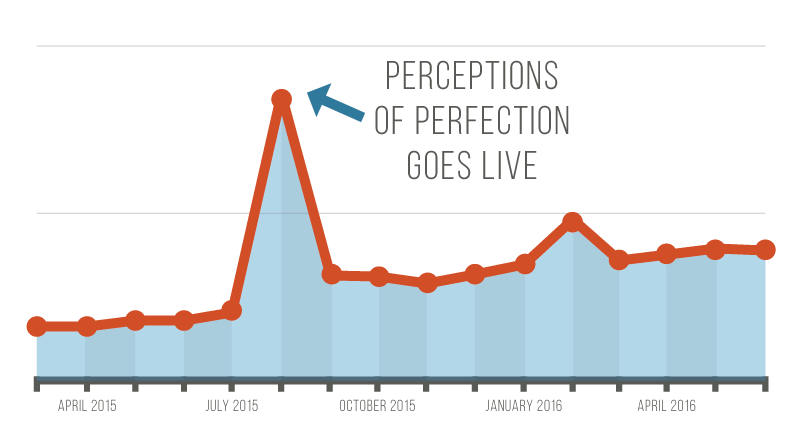 We were able to get these results for Superdrug Online Doctor because we recommended broadly appealing content as the strategy.

Read on to find out how we made it happen.

How to Make the Most of Broadly Appealing Content

There’s never a guarantee content will go viral; always be skeptical if someone makes this promise because there are too many variables at play.

In fact, across this engagement of 20-plus campaigns, most of them didn’t hit “viral” levels; that’s not how content strategy works. When you set up a plan to attain viral potential, you’re counting on a few of the many campaigns to hit it big – so big that you see the results like we achieved above.

At Fractl, we’ve discovered many of the key components necessary for giving a project high viral potential. While other factors play a part, like current events, editors’ story capacity, etc., all content needs to meet certain criteria to even have a chance at reaching wide levels of coverage.

Superdrug Online Doctor wanted to take this approach to experience a significant boost in website traffic. That means they were willing to do all of the following (which are all vital when obtaining as many placements as possible to increase traffic is your objective), and it allowed us to reach their goals.

1. Remove most branding from the picture.

If you look at the Perceptions of Perfection campaign’s landing page, you’ll notice that, aside from the simple navigation bar at the top and the link to Superdrug Online Doctor at the very bottom, there are no other branded components of the page. There are no logos on the graphical assets, meaning that when publishers post and readers share the content, the logo isn’t following along with it.

If the primary goal of the campaign is to increase website traffic and garner as many high-quality links as possible, branding should always take a backseat. Insisting on branded colors, fonts, and logos will only increase the probability that a publisher will notice the branding, and this may turn them off to the content. Writers and editors are often on the fence to begin with, so we don’t want to give them a reason – albeit a small one – to say no.

2. Produce content more tangential to your brand or industry.

If Superdrug Online Doctor wanted to create content closely related to their areas of men’s health and women’s health, they could have done “X Ways to Prevent Hair Loss” or a look at reasons why people should quit smoking. While this content is completely valid and would make decent on-site material, it’s nowhere close to being new and broadly appealing enough to achieve viral goals.

For a tangential approach, the Fractl creative team considered everything Superdrug Online Doctor sold and then brainstormed how to take those categories and zoom them out or find related topics to create broadly appealing content.

For example, Perceptions of Perfection is about what is considered beautiful around the world, which has connections to health-related topics.

Another example is that Superdrug Online Doctor also sells sexual health items – and as the old adage goes, sex sells. By starting with sexual health products and then backing up a bit to the entire topic of sex, we were able to create campaigns like Sexiest Places in the World (which garnered 133 stories), vastly increasing the number of people around the world who would be interested in checking out the content.

While not directly tied to selling sexual health products, the topical connection is clear with these campaigns, and that’s key (as going too off-topic raises questions about your motivations). Having the courage to approach content like this when you have SEO-based goals is essential for success.

There’s a lot of controversy around the topic of body image. Some believe women need to learn to love their bodies no matter what, while others caution against supporting obesity or unhealthy lifestyles. Often, the debate can get ugly. And yet we tackled this topic with Perceptions of Perfection and received a massive number of links as our reward.

But that wasn’t the only campaign we produced that dabbled in trickier topics. We also explored many issues related to sex – a topic that can sometimes be taboo or embarrassing for people.

In our campaign Top Sex Fears (280 stories), we surveyed 2,000 people to see what people worried about most during sex (with gender breakdowns as well). While this isn’t inherently controversial, worries like whether you’ll get an STI or your partner won’t want to use a condom open up conversations that can become controversial in nature. Including those possibilities as survey options meant we weren’t afraid to objectively broach the subject, and it was key to this campaign’s success.

Another example is our What’s Your Number? campaign (200 stories), in which we explored the cultural connotation around how many sexual partners you’ve had in the past. 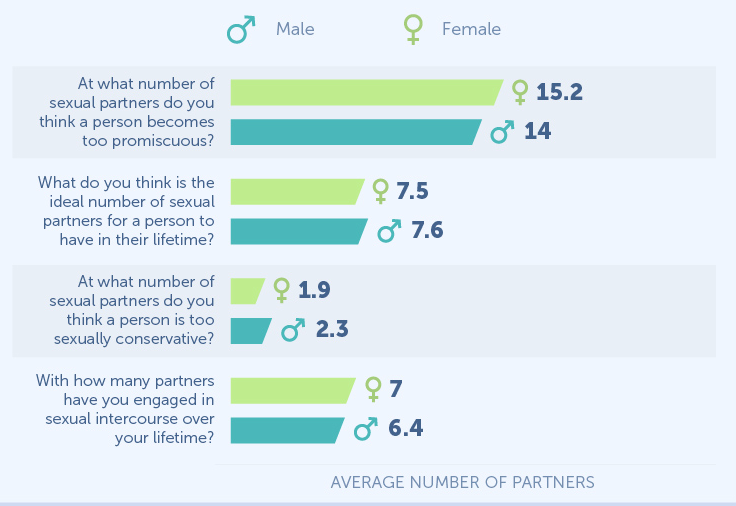 This subject matter fosters controversy because of the varying stigmas around men and women regarding the frequency of their sexual activity and how people define or label promiscuity. In using a survey to try to uncover how people honestly perceive the topic, we were able to enter the engaging conversation in an unbiased way.

If a topic is controversial or taboo, it means that it most likely hasn’t been explored in full yet. It also means it has a high chance of getting engagement from the publishers’ audiences. That’s why it wasn’t a big surprise when the writers we pitched these two campaigns to gave us some “love”-ly responses: 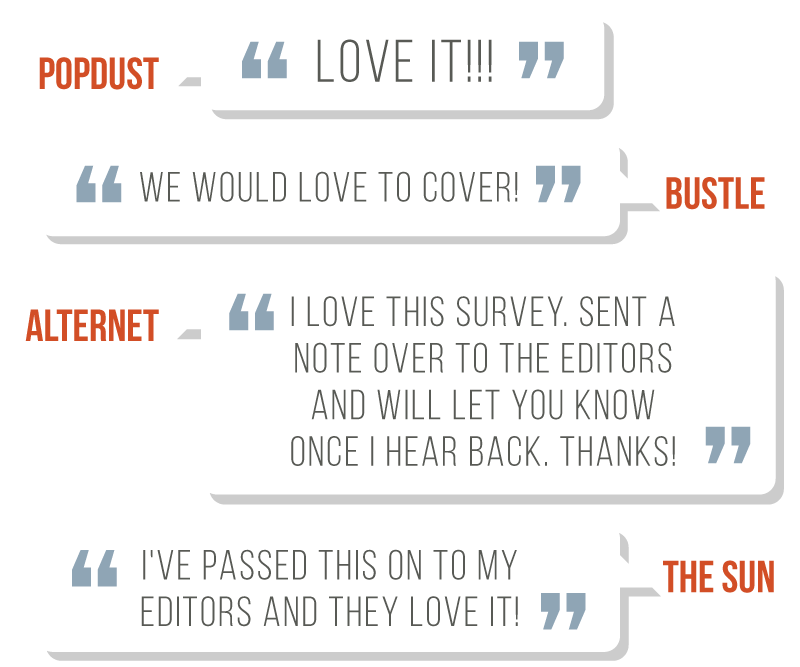 You can read more about the benefits of controversial content (and best practices for producing it) here.

While virality can never be something promised, implementing a strategy that focuses on widely appealing content that meets the criteria above is a surefire way to see improvements in off-site SEO.