December is a month of winter chills, festive lights, and accidental carb-loading, but it’s also an important time for reflecting back over the past year.

At Fractl, we do that by examining the results of the content campaigns we’ve created and by considering what we’ve learned along the way so we can apply those content marketing insights to next year’s work.

Below you’ll find the Top 3 insights as well as the Top 2 confirmations of previous notions we had about content marketing.

Let us know in the comments if you noticed similar trends!

That revamping/updating a successful campaign is definitely worth considering. 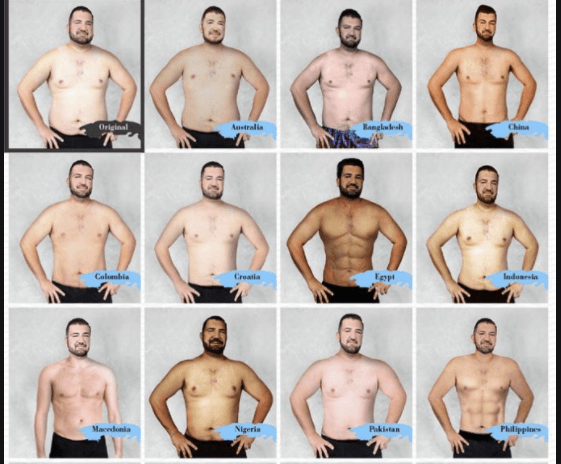 But perhaps an even better illustration of how a simple change can provide great results is our update of the original Perceptions of Perfection campaign, which received about 600 media stories and more than 920,000 social shares.

The campaign, which involved asking graphic designers around the world to edit an image of a woman to make her “beautiful” according to their countries’ standards, did exceptionally well – so our team considered whether a slight tweak would be worth pursuing in a separate campaign:

What if we did the same thing, but with a photo of a man?

Perceptions of Perfection Part II incorporated that idea and garnered more than 800 media stories and more than 670,000 social shares and serves as the perfect example of how seeing a content campaign from a new perspective and taking the time to execute that vision can have enormous payoffs.

Of course, you won’t be able to tweak every content idea by switching the gender examined or making similar adjustments. To get a better sense of whether your reimagining will work, ask yourself if the change:

*The last point is important because if it doesn’t, you’ll need to conduct audience research to make sure the content has the potential for success with that different target audience.

For other ideas on how to revamp content, ask yourself:

The first successful campaign serves as a proof of concept if you’re not deviating too far from that idea, but it’s still important to assess the merit of the “new” idea to lower your chances of creating a campaign that’s too redundant.

You’re probably no stranger to the “millennial” headline – they’ve been so common that they’ve even sparked parody articles about their dramatic nature and frequency. And as you can see in the Google Trends chart above (where that spike is in early November 2016), we seem to be living in the potential peak of this phenomenon.

No. 1 is especially true if the stories that keep popping up seem hyperbolic, particularly to people in the age group the articles refer to.

With this in mind, we decided to create a millennial-focused campaign, but our mission was to talk to them – see things honestly from their perspective – and present the story that way.

So we surveyed 2,000 Americans ages 18–34 to ask what they most look for in a city environment, allowing millennials to speak for themselves.

The resulting campaign received more than 470 media stories and 18,000+ social shares. By passing along this content, writers had the ability to hear from millennials in a more direct way and were able to explore the legitimacy of common stereotypes in their stories.

When we reflected on this campaign, we realized our approach – trying to be as transparent about what millennials are actually thinking/feeling – is most likely what helped this content resonate with a wide audience.

We sensed they were tired of being spoken for, so we gave them a voice, a strategy that should be considered across the board when trying to come up with ideas for content.

That a lot of the best content either challenges or affirms identity. 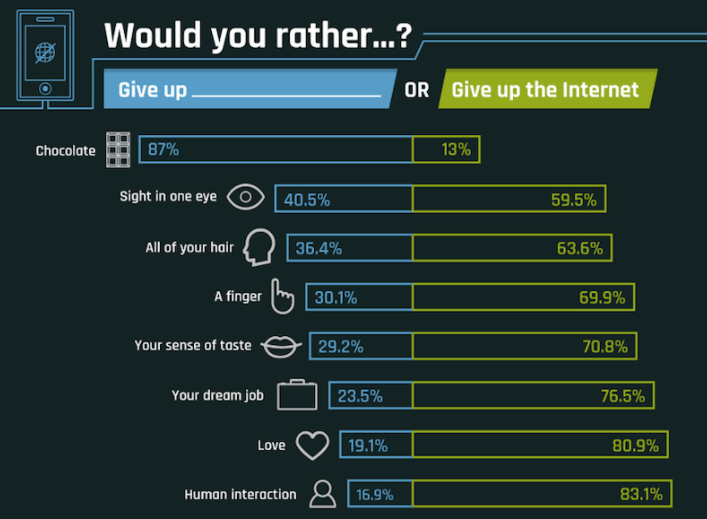 This point is perhaps why millennial content has gotten so much traction in the past – we’ve noticed that people emotionally respond to articles and graphics that somehow relate to who they are as people.

What does this mean?

If someone is reading your content, and they ask themselves, “How do I fit into this? What does this say about me?” then you’re on the right track.

Consider the image above, which is one graphic from a campaign that explores what people are willing to give up in order to keep the internet. This project, which sparked more than 300 media stories, has us all asking the question: What would we be willing to give up? It also provides a broader look into overall humanity and our society’s priorities, which are always extremely engaging to see.

When we explore some of our top performing content, we see many other examples, including What’s Your Number?, a campaign that explores how people feel about discussing their number of sexual partners. When readers see this content, they think, “How do I feel about this? How would I approach the situation?”

These are exactly the kind of questions you should hope to elicit from people consuming content, and it’s a great thing to keep in mind during ideation and while actually creating the assets.

Remember what you just read about identity? (I hope so – it was like five seconds ago.) Well, geo-bait might be one of the most prominent examples of this identity concept at work.

Location is a huge part of many people’s identity, from feeling pride about what city they live in to supporting certain hometown sports teams.

When they see content that includes their location, they want to check out how their city, state, or country fares, because by extension, they can find themselves in the data as well. This might be why:

One of those campaigns was our Most and Least Politically Correct campaign, which examined thousands of tweets from different states to determine where the most racist, sexist, homophobic, etc. language was being shared.

Part of its success also stems from the fact that it’s controversial, which brings me to my next point.

Controversial content can be a means for success, if done correctly.

Brands are often afraid to tiptoe into controversial waters, as there’s a risk of sending the wrong message. This is understandable, but at Fractl, we know that controversial content often does extremely well, which made us want to explore how to create it in a way that’s engaging while not damaging any reputations along the way.

We realized the key to controversial content was to present the information in an unbiased way.

How do you do that?

Make sure the data does the talking, not your write-up or your brand. Once you start taking sides, that’s when things can get iffy.

Publishers prefer this route, anyway, because oftentimes they’re looking for the information but want to build the story themselves, which allows them to take the responsibility of telling a particular narrative.

In the case of this campaign, we illustrated the results of a Twitter analysis, and the campaign received more than 600 media stories and more than 60,000 social shares.

So put the engaging information out there, and allow publishers and readers to do the talking.

While we’ve been in the business for years, there’s always more to learn as tastes change, trends develop, and publishers evolve.

I hope the insights we’ve gained from 2016 have been enlightening, and if you’ve made other discoveries, feel free to share in the comments!