Content marketing is tough. Staying current with the latest trends while managing expectations and waiting for results is challenging enough, but one of the biggest hurdles is the clutter. There’s an incredible amount of noise to cut through before your audience can be reached, let alone respond.

Think about it. Writers publish an estimated two million blog posts each day. Even if you take 90 seconds to skim this article (let’s be honest: you’re probably skimming), over 2,000 blog posts will be created by the time you’re finished.

With that in mind, here are five actionable tips to help your content marketing stand out, instead of getting drowned out.

It’s much easier to avoid parity with others in your space if you’re saying something no one else can. Anyone can regurgitate what’s already out there, and some do it quite well, but telling a story using internal data at least promises uniqueness.

Jawbone is a wearable technology company that builds “products and software platforms powered by data science.” As its mission statement expresses, Jawbone is a company rooted in data. The company uses data to improve its products, help its customers, and spread awareness about its brand.

The Jawbone blog regularly features stories with trends in data collected by Jawbone’s wearable devices. By using information that is exclusive to its database, Jawbone can gain brand exposure by sharing content that is relevant to a large audience.

Its interesting data stories include: 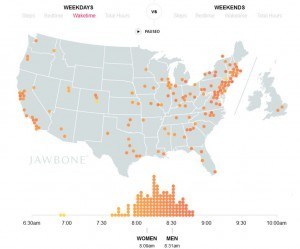 Don’t have a large data set? Sometimes it’s less about the data you have and more about arranging the available data in new and interesting ways. For example, the University of Pittsburgh looked at U.S. disease reports dating back to the late 1800s to see how vaccines have impacted the prevalence of infectious diseases. Another example is using data from LinkedIn, Indeed and Census.gov to rank the top cities in America to get an SEO job based on supply (openings) and demand (applicants).

Start with inventory. Depending on the size of your organization, there’s a strong chance useful research or shareable art has already been developed from inside your own walls. Find something with potential, dust it off and repackage it for a new release.

Nearly every company has web analytics and a CRM database. See what non-personal data you have about your audience’s behaviors, preferences and characteristics that would be intriguing to your existing and prospective customers.

Team Up with Related Verticals

Sometimes we spend too much time worrying about our competitors and not enough time growing our network of partners. Co-op advertising, traditionally conducted between local vendors and manufacturers, has some core principles that can be carried over to content marketing:

This not only limits your upfront cost but it gives you exposure to a whole new audience segment.

Fractl and Moz are in related digital marketing fields but are not competitors: one is a creative agency, and the other sells marketing software. However, the two companies have an overlapping audience, which makes them perfect candidates to co-author content. 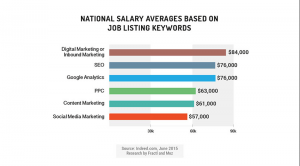 One of Fractl and Moz’s collaborations looked at the current job climate for inbound marketers and predicted where it’s headed. Not only was this published on both the Fractl and Moz websites but it was picked up by Indeed, Forbes, MarketingLand, Hubspot, and other notable sites.

Start a list of all related verticals and document any companies within those verticals with whom you already have existing relationships. Even if you don’t immediately find a co-op opportunity, this thought exercise should help you with your own content strategy.

Don’t limit yourself to just the obviously related verticals. Look for seemingly isolated topics where the only connection is their audience. While a little outdated, this post on random affinities is really helpful in uncovering these connections.

Simply put, it’s better to be a big fish in a small pond than the other way around. Pinpointing your content coverage allows you to be not just another voice in the crowd, but an authority on a subject. Your potential audience may shrink, but your actual audience should grow as a result.

Nomadic Matt has been a travel blogger since 2008. With over 800 blog posts and dozens of other evergreen resources, Matt has had plenty of experience in content marketing. When he was just starting out, like many new bloggers, he hadn’t quite found his focus yet. His content ranged from airline reviews to travelogues to history lessons, with nothing specific enough to define him in the field.

Slowly but surely, Matt started zeroing in on his target. His blog was not just for any traveler; it was for the anxious traveler. Those who were new to travel, low on funds, traveling alone, or worried about safety abroad could look to Matt’s blog for stories and advice.

But was his hyper focus meaningful?

For all of the 803 blog posts from 2008 until now, I calculated the percentage of titles that contained any of the following “focus” words: solo, alone, by yourself, budget, money, $, cost, free, new traveler, safe, secure, fear, scare, anxiety, girl, female, and gay.

While multiple factors certainly contributed to the increase in organic search visits over the years, (like how each year receives a residual return from previous years’ posts) it’s striking to see the parallels between the visits and the focus word percentage trends, particularly with their steep inclines. Matt’s post frequency has even gone down over the past five years, further supporting the idea that less frequent but more focused content trumps extra but overstretched content.

The problem with this simple content approach is that the sweet spot of overlap can be too general to distinguish you from your competitors. A better approach is to replace the left side with what your brand can say the best. Brainstorm with key stakeholders to determine what that particular sweet spot is for your brand.

Like Nomadic Matt, if you’ve created content long enough, there’s a good chance you have already written appropriately focused content. Create a content inventory and audit its performance to discover what has resonated most with your audience.

Challenge the Majority (As Long as it’s Authentic)

Another way to create contrast against the backdrop of other content is to challenge the norm. “Groupthink” is a term used to describe what happens when a group of individuals start gravitating toward the same opinion and letting the persuasiveness of the majority take hold. This happens at a macro level too. Challenging the current public opinion can be a great way to stand out, as long as you’re prepared for the recoil.

Since we first heard the word, we knew aspartame to be harmful to our bodies. So when the American Chemical Society released a consumable and convincing three-minute video attempting to debunk this notion, people ate it up (no pun intended). 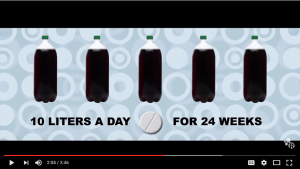 The video has been viewed over 100,000 times. Even an article written about it on the PBS website has over 17,000 shares.

It seems like there’s a conference for anything nowadays, so chances are your industry has one as well. Look through the latest conference agendas or browse industry leaders’ content to determine where “group think” might be occurring. If you have a solid, thought-provoking view that counters the majority opinion, it might be worth promoting it.

You should always be authentic; however, you should be extra sensitive to how your authenticity may be perceived.

An article was recently published challenging a list of marketers to follow on Twitter. The article revealed that out of the 24 marketing experts listed, only four had any formal education in marketing. The writer’s argument was that to be considered an expert in any industry, education in that industry should be a precursor.

Unfortunately, at the bottom of the article was a call-to-action to buy the author’s MBA in Marketing course, casting suspicion on the author’s motives. While the author may have had sincere intentions, he experienced plenty of backlash as a result.

Put the Elbow Grease Back in Your Promotion

Technology undoubtedly has made promotional research and outreach much faster and more expansive. This is a good thing. Be careful, however, not to trade quality for scale.

Use technology to speed almost everything up but slow it down when you’re actually reaching out to someone. People can tell when you’ve respected their time by learning about them in advance to deliver a personalized message.

A few years ago, Kotex didn’t cut any corners with its outreach. In fact, it was the company’s whole plan. Kotex found 50 Pinterest influencers, discovered their tastes from their boards, brought to life what inspired them, and delivered it to their doorstep. As you can imagine, the influencers took care of the rest. If you haven’t watched the video, you should.

Make sure your content publication plan details critical milestones to launch as well as your promotion strategy. For bigger releases, outreach should be slated before and after the release to gain influencer buy-in.

Use Followerwonk to search Twitter profile descriptions when trying to find influencers. Searching “writer,” “contributor,” “write for,” “blogger,” “journalist” or any other related word concurrently with your main keyword will likely surface a list of quality candidates.

Sometimes breaking through the noise seems more like an impossible dance than a repeatable science. The truth is that it’s a little of both. While none of these tips will guarantee you success in your next marketing campaign, hopefully, I’ve given you a few ideas worth pursuing.

Tylor Hermanson is obsessed with the Houston Rockets, live music, and sleep, with the latter often getting the boot. He is the Sr. Manager of Search Strategy at Intouch Solutions in Overland Park, Kansas. Keep up with Tylor on his blog, Sandbox SEO, or follow him on Twitter.